All operators:  Attending the Lion Claws XVII event is a commitment. You are responsible for meeting the requirements. Please ask if you have questions or need assistance.

AO Location: The event location is the same as prior years which was George Air-force Base in Victorville SoCal. 17746 George Blvd. Victorville, CA 92394. Per Google this is a 6-7 hour trip from Sacramento.

Area Description: George Air Force Base was decommissioned in 1992 and has been left to fall into disrepair ever since. Among the abandoned structures are hundreds of homes, barracks, and a couple of schools. The sprawl of abandoned and dilapidated buildings, dead landscape, and years of collected tumbleweeds.

Expect that fuel costs will be shared by ALL operators in each the vehicle.

It is rated 4+ stars by it guests has a pool and nice amenities. It is 12.7 miles from the AO and is a nice hotel for the price.

Showers, toilets, and beds are nice. Fridge and Microwave. The Jacuzzi, pool, and pancake machine are a plus for our mornings and evenings! Walking distance to great food and a movie theater.

YOU are responsible for paying for your room including tax and anything else on the bill!

This is an obvious expense that must be considered per operator. Plan for it. Most operators carry a 2.5 or 3 liter hydration carrier during the OP. You are expected to be prepared and self-sufficient.

AEGs are required to fire under 366 FPS using .25 gram ammo. Read the LC rules for any exceptions.

Required. Elite Force M4 mags were available from JF last year at around $8 per mag, and worked in all AEGs so mags could be shared during a firefight.

Only fully sealed eye-protection is allowed. Read the rules to see that yours meet the requirements.

Although not a requirement, quality gloves, knee-pads, and lower face protection is recommended.

The military has what they call ‘Blue Force Trackers’, and we use a program which works similarly in effect. For those who have Smartphones, you should be able to download an app called Maprika at no cost. Once we have a copy of the AO map provided by OPCOM we will upload it, and then using GPS the app will place a marker on the map shown on your screen identifying each DC team member. This app is not currently an LC requirement, however it is heavily suggested as it may provide you the only means of regrouping with the team considering the one-square mile MOUT AO.

LC Team operators must have a radio. Your radio will be programmed by Kurt (RTO) prior to the OP once we have received our team frequencies from OPCOM.

The team radio is BAOFENG which comes standard with a HIGH GAIN antenna. Our suggestion is to add an improved antenna by SAIN SONIC which will greatly improve the transmission/reception between operators. You may also want a cable extension to relocate your antenna away from your radio pouch.

Each operator will have a gray shemaugh. You can get this one LINK or you can get it from JF Airsoft/Paintball in Grass Valley. Let's support local!

ALL OPERATORS MUST HAVE GREY SHEMAUGH!

After you have registered and paid a confirmation will be sent to you by e-mail. Blazed will let you know when to expect its arrival. Contact him with any corrections at that time. REGISTRATION LINK

ALPHA forces wear Mutlicam uniforms and are commanded by CSM Collazos. He will have one or two officers who will assist in command and communications. ALPHA will likely have four (or more) Platoons led by a Platoon Leader (LT), who is assisted by a Platoon Sgt. (PLSGT). Each Platoon consists of four squads, each led by a Squad Leader (SL). Each squad typically has twelve operators, and may be broken down into Fire-teams led by Fire-team Leaders (FTLs). It is NOT as confusing as it sounds here. 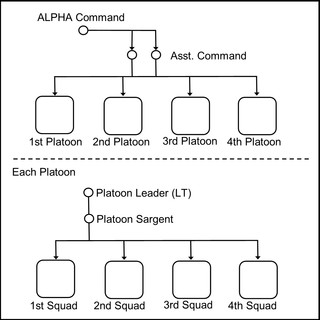 In 2016 Diamond Corps again commanded ALPHA 2nd Platoon, and had DC operators in both squads 2/2 and 2/3.

Thanks Kurt Thanks Komissar Thanks Jensen.  Make sure you guys check out JF Paintball for any needs you may have first.  They've been good to DC.

Also Download the Telegram app on your phones to stay up to date with the team.

For registration make sure everything matches your driver's license exactly. We haven't had any problems but they say that everything must match.

Best way to stay up to date with what’s going on is by downloading Telegram the app get it now!

If I scramble to put together a registration, what's the rules in 249's? Load them with STANAG style mids or would the box be acceptable for that weapon?

A box is acceptable for saws but I think we have the position filled but will double check.  Also if your interested in going I have to get you cleared with DC command for there are requirements to be met.  If your really interested in going be at DC field at 730 this Saturday wearing multi cam or tan.

I had talked to Komissar about it but it was just feelers. Doing some extra digging, not sure I'll be able to pull anything together by then (I spent a lot of money on Metal tickets) but it's all good info for next time

I need a confirmation on who has paid!

Emprise Army Airsoft. Jonny and Jacob are my teammates.

What team is that?

What team is that?  Have you played on the DC field before?