So everyone I wanted to let you all know that I am preparing a Vietnam era op. this is currently in the works and a date has not yet been posted but i wante to give you all ample time to prepare a kit and to have your guns ready due to the restrictions of the op. if you do not adhere to these guidlines you will not be able to participate. i can post a few pictures there is also a few pictures on the site as well.

For kit i would like to see everyone try and get a full authentic looking kit. i would like it to look authentic so if you need something here are some good websites here and here and here or ebay. you can find almost everything here. i will not allow molle vests but if you have molle pouches that is ok just try to get original pieces. no woodland or modern what so evaaaaaah. now for uniforms like i said i will not accept any woodland or modern uniforms. you must follow the exact guidelines below. below i will go over things you must have exact and things that are more suggested or recomended.

With all this i am not trying to exclude anyone, i am trying to make an op seem as real as possible. the more you put into your rig the more realistic it will feel (and if you go ot a different game others will be envious hehehe).

if you have any questions or any thing you want to make sure will work such as rubber knives let me know and i will try and help ya with it. also let me know your thoughts or if you want to add anything. so far the missions are in the works and it will be coming to an airsoft field near you (hehehe). anyways hope you guys have fun putting your kits together. 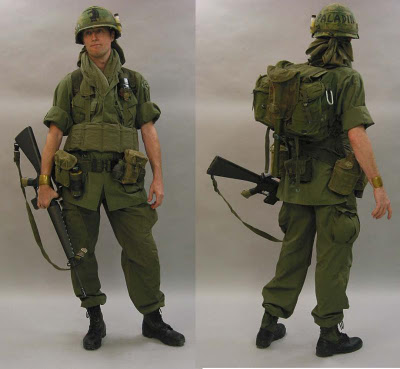 Tank, could you clarify the VC versus NVA uniform? Are VC black and tan with a black/white shemagh and NVA are OD green? Thanks.

These distinctive checkered scarves resemble those worn by the Khmer people. The Cambodian 'Krama' scarves have been a symbol of the Khmer for thousands of years. Although made in a variety of vibrant colors, red Krama appear to be the most common, especially during the Khmer Rouge regime. The Vietcong are seen almost always with black and white checkered Khăn rằn. It is said that these scarves were used for identification or given as awards for bravery. The scarves serve a very utilitarian purpose and can be used for a variety of tasks and uses.

The colorful checked scarf known as the Krama is almost universally worn by rural Cambodians and is also popular in the cities. The scarves are made from cotton and the most famous krama's are found in Kompong Cham and Takeo Provinces. Krama have a multitude of uses, they are primarily used to protect Cambodians from the sun, the dust, and the wind, and it is for this reason many tourists end up investing in one during a visit.

It is worn by men, women and children, and can be fairly ornate, though most typical kramas contain a gingham pattern of some sort, and traditionally come in either red or blue.
However, they are also slung around the waist as mini-sarongs, used as towels for drying the body, knotted at the neck as decorations, tied across the shoulders as baby carries, placed upon chairs or beds as pillow covers, used to tow broken-down motorbikes and stuffed inside motorbike tires in the advent of remote punctures – the list is endless!
Kramas are sold in markets throughout Cambodia and are an essential purchase for travelers using pick-up trucks or taking boat services. They have become very much a symbol of Cambodia and for many Khmers, wearing one is an affirmation of their identity.
This scarf measures 56” X 15” (inches), traditional checkered design are found throughout the majority of the material. The bottom and top regions display a solid red and white colored backdrop with decorative checkered white stripes and intermingled thread endings.

Hey Guys I made a Chi Com Grab bag order and got TONS of extras...any NVA or VC people need Chest rigs $10

Justin put me down for 1, please. Looking for an old pistol holster for my .45 also.

Got it set aside for you.