After Action Report for February 8th, 2014 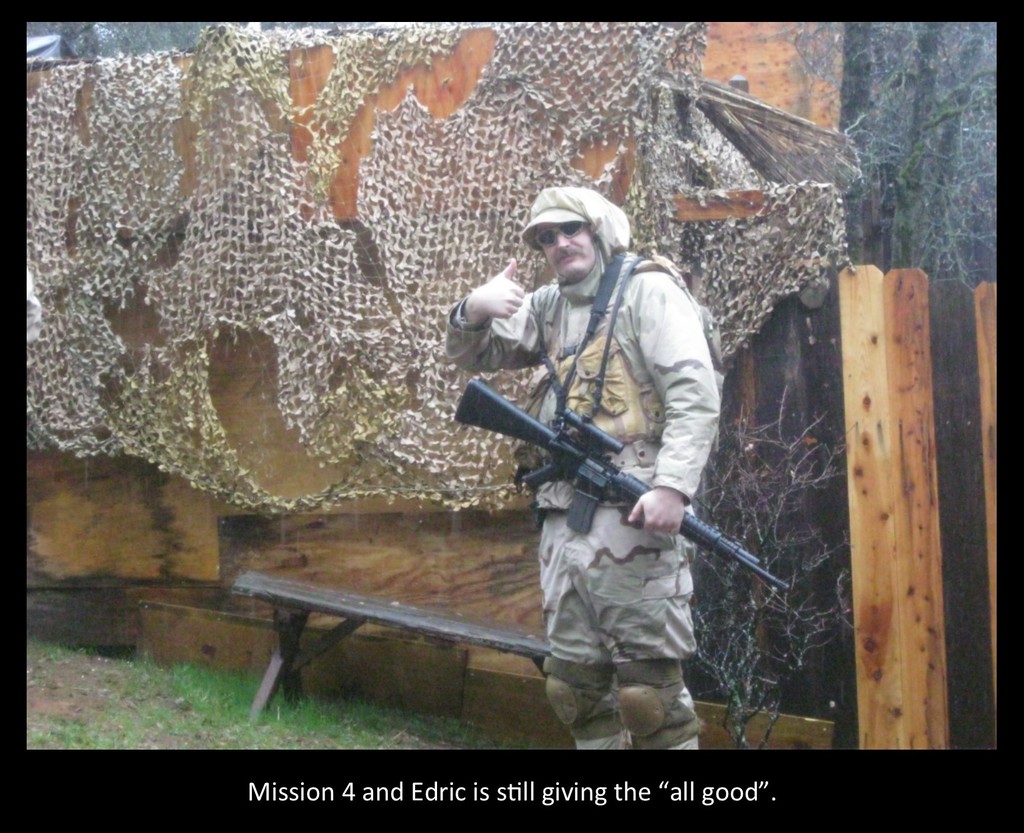 It's raining! For the seven years before this year it had not rained on our Missions Day events! In January it rained and many operators left the field before lunch. This time however, the more it rained, the more determined were those who came to play! We had serious operators in attendance, and they were not going to let the wet keep them from having a great time!

Those that came this day battled not just against their opponents and the tough missions they were assigned, but against the constant drizzling rain.

A total of 21 showed today and nearly all stayed to the soggy end. 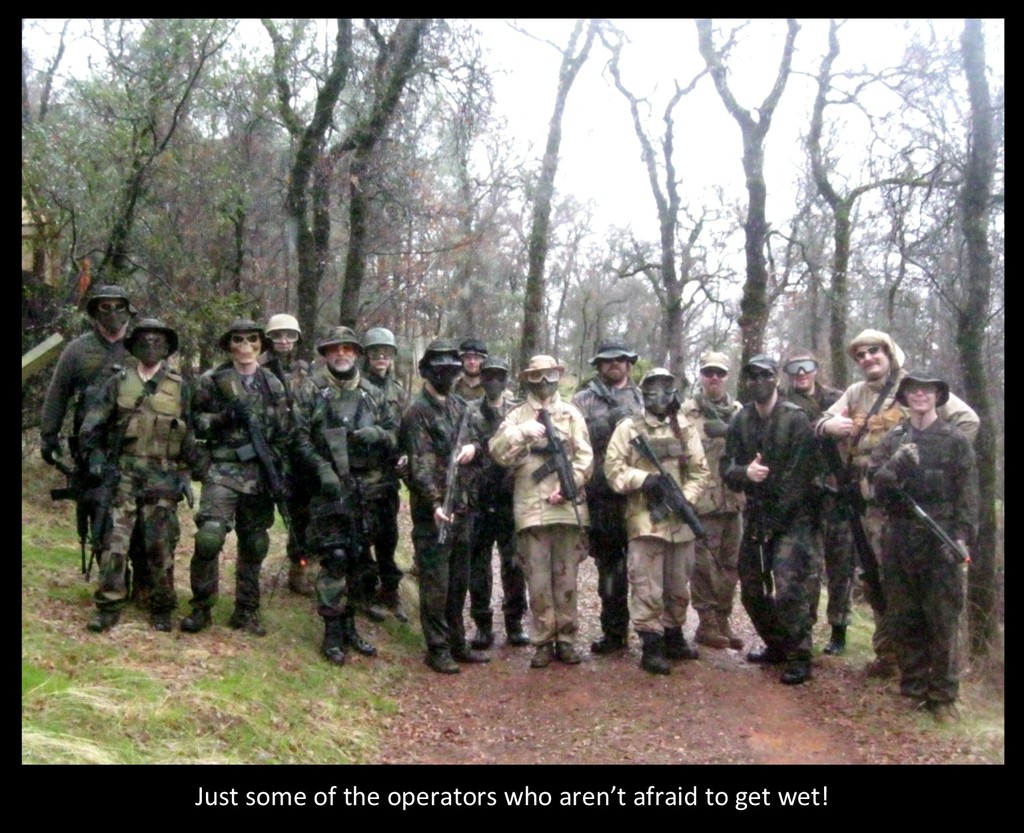 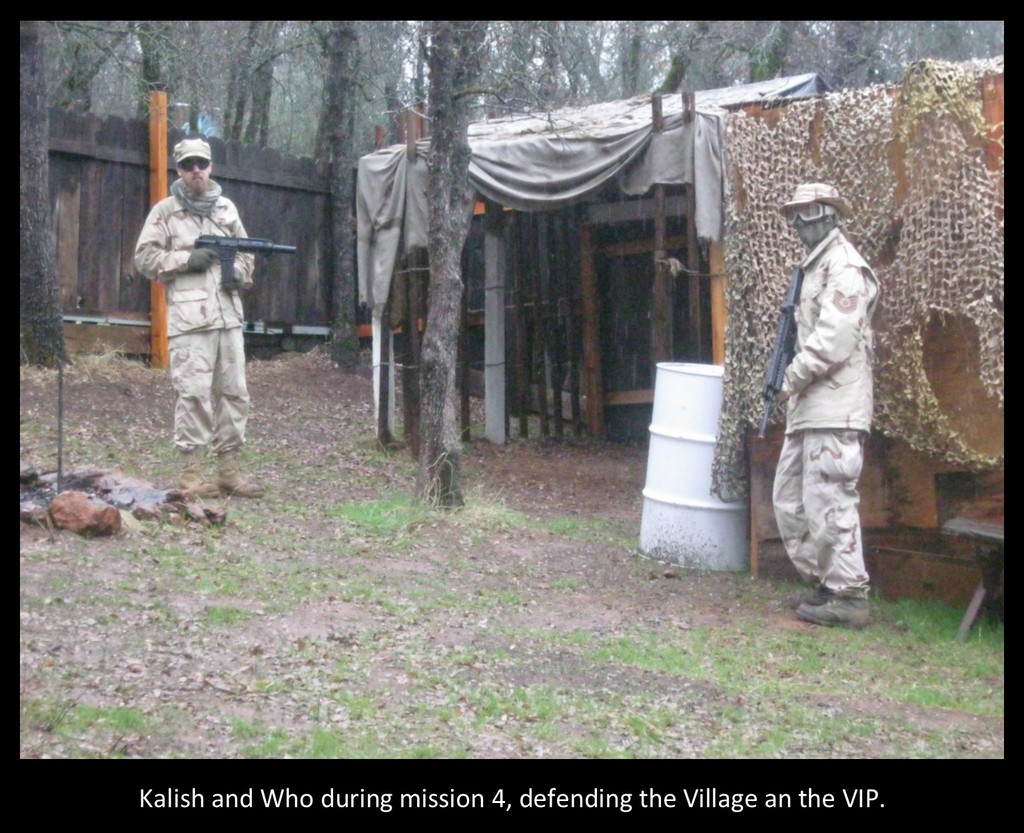 3)      With no lunch break, the operators were ready to continue to battle it out, . . . so we did. The Red forces, soon nicknamed the Tan-Joe-renes, started at Knights Rock area and needed to clear six mines from the road. (The mines were placed between Knights Rock and Blue One base). In addition they needed to defend one person of their team who was designated VIP. The opposing Red forces were to defend the mines, and capture the Blue forces VIP.

Special Rules: If the VIP was shot he would remain in place for two minutes. If touched by an operator from the Red force he was considered captured. Also, the only Red forces who could disarm the mines were the operators in tan uniforms. (4 operators). 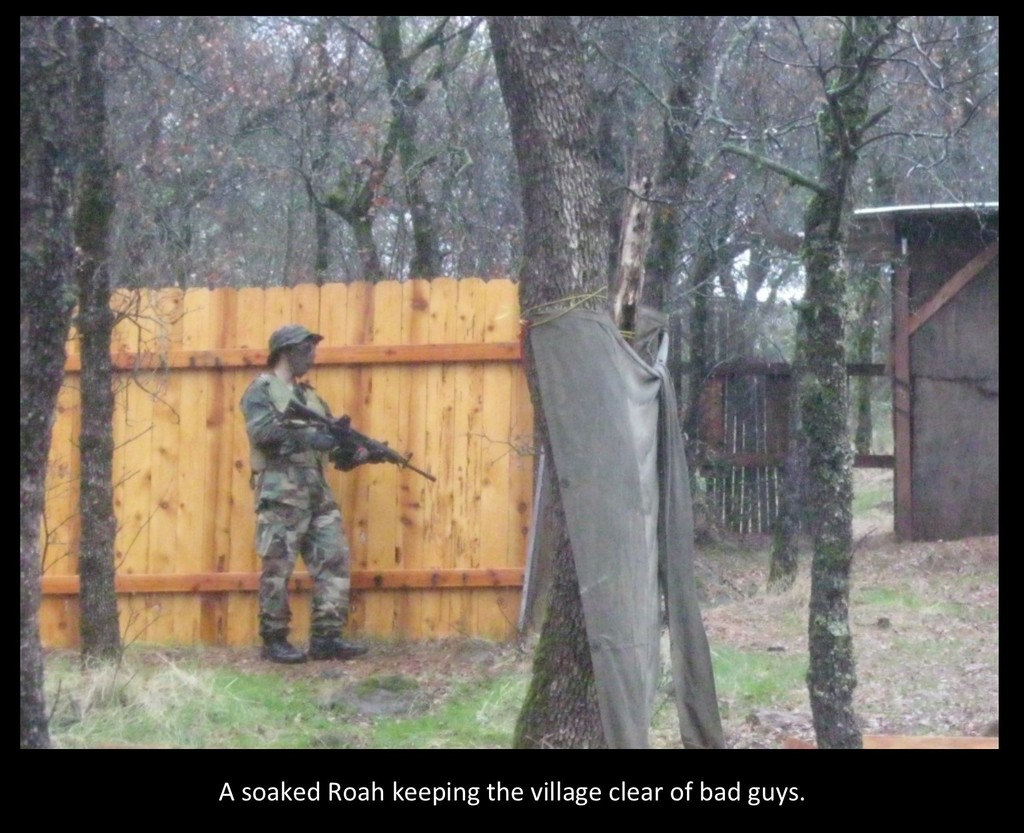 After the Demo Pack was delivered to the village the second stage of the mission began. The Red forces would fall back and defend Blue One and Blue Two bases. The Blue force needed to locate a pre-placed ammo box in one of the two defended bases, and then recover the box to the village. The Blue force was also issued a Demo Pack which they needed to deliver to the remaining base found to not have the ammo box. 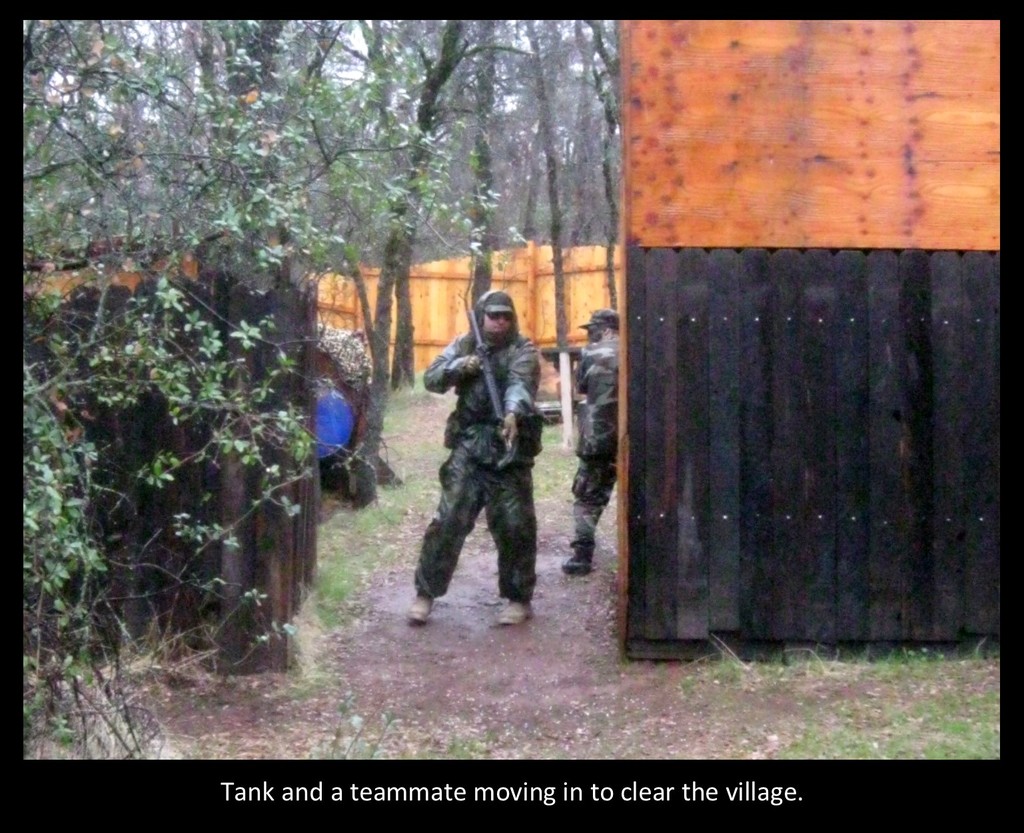 Normally I don’t post AAR’s for Missions Day events, but the spirit and great attitudes of the operators who attended today was exceptional. They were motivated to get their missions completed. They worked together through the wet adverse conditions, and kept the spirit of things light and positive! 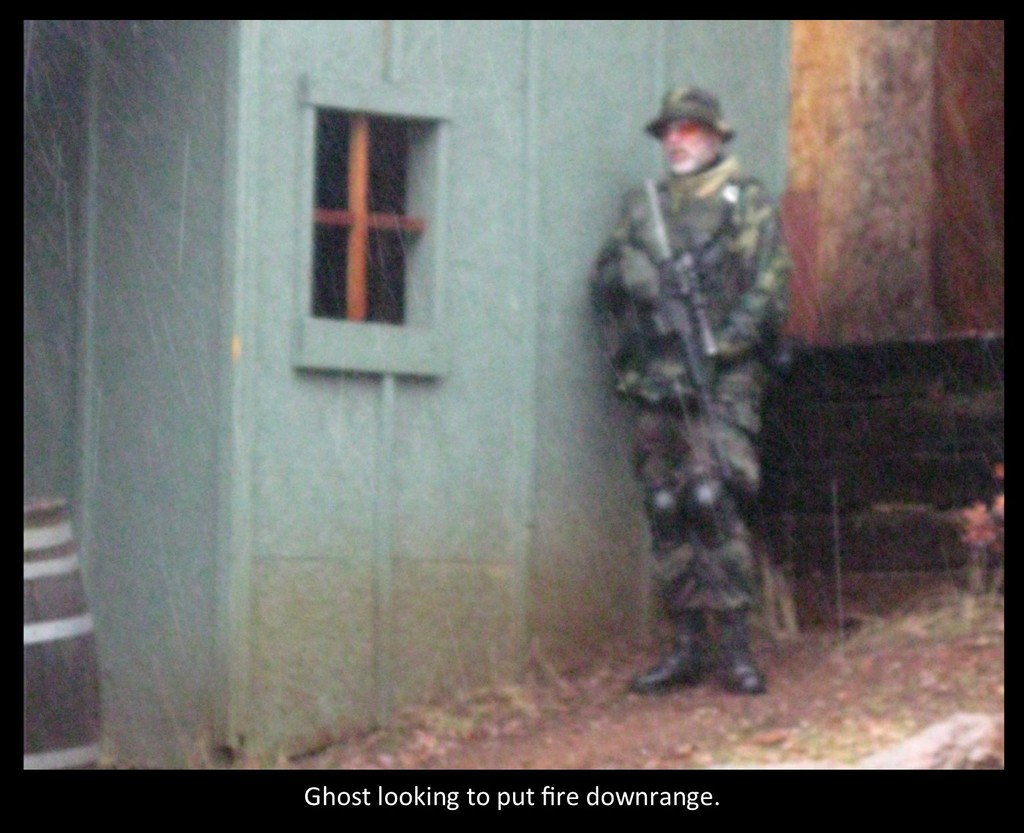 Too many times the operators wait to have perfect conditions; not too hot, raining, cold, or windy before getting on the field. Today’s operators brought the good time with them. The sky gave them rain, and they just grinned and squeezed the trigger.

My respects go out to the operators today. Well fought. See you next time. 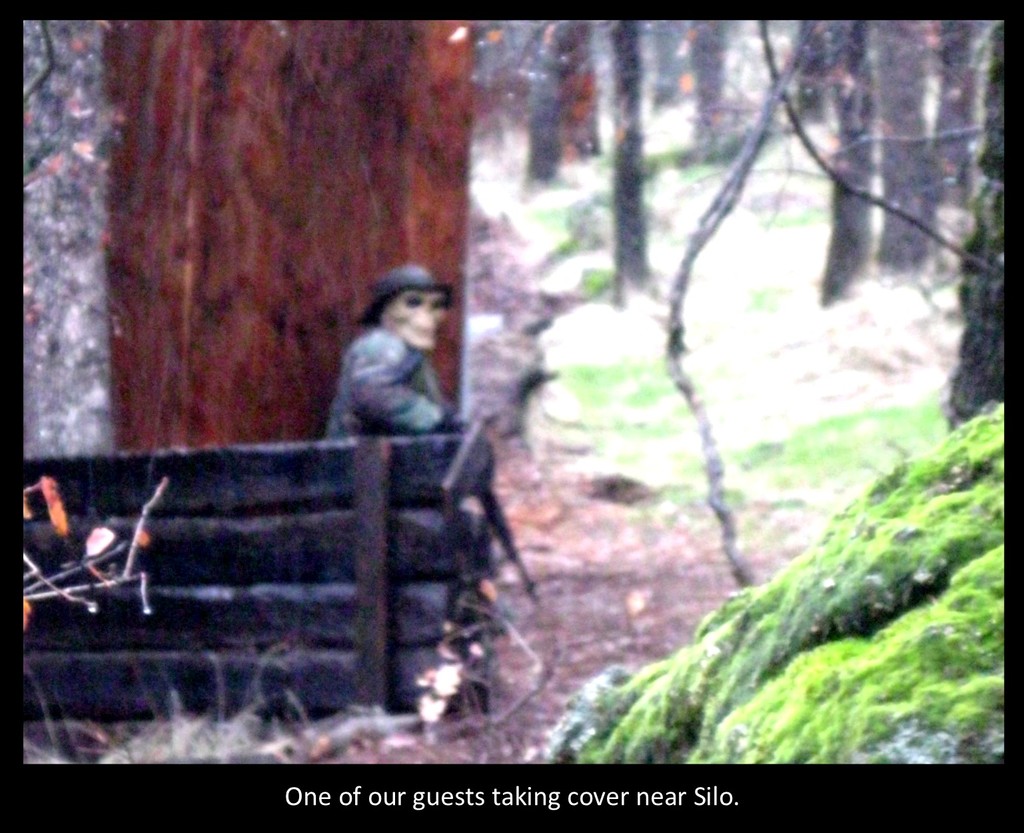 Best Airsoft day I have had in years! SOOOOO much fun! Thank you to all who came out! It was amazing! I want to thank Ghost for his great attitude! In spite of having what most would consider having a bad day, he kept it positive! That is an incredible feat that few can do! So fun to be back in the game!

Permalink Reply by Northman on February 11, 2014 at 12:15am
Great start to what will assuredly be an awesome year of airsoft!

Wow... Looks like fun. Cant wait till I am only a Days Drive!